I’m a Celeb Special: Top 10 Castles in Wales You Have to Visit

North Wales is back on the map with I’m a Celeb being filmed at Gwrych Castle again this year! Here are some other castles in Wales to add to your bucket list…

There are many things we love about Wales: the scenery for one, and the culture for another. This Celtic country is steeped in stories and legends, and with this rich history comes some beautiful architecture. If there’s ever been a time to check out some cool castles in Wales, it’s now! 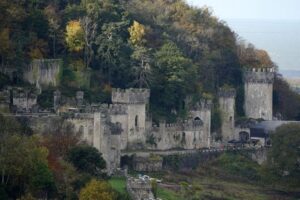 With I’m a Celeb back on our screens to keep us warm and entertained this winter, there’s been a huge uptake in the interest surrounding castles in Wales. Find out all you need to know about the country’s towers, moats, and ancient sites with this must-visit checklist blog post…

Starting us off on the list of most Googled castles in Wales right now! This 19th-century fortress was built by Lloyd Hesketh Bamford-Hesketh as a nod to his maternal ancestors. Now a Grade I listed country house, nestled among a 250-acre estate, Gwrych Castle has had many owners and renovations and is now host to this year’s second showing of I’m a Celebrity…Get Me Out of Here! You can purchase tickets or an annual pass to this elevated coastal kingdom by clicking here – and the brave ones can find out more about next year’s ghost hunt tours too!

This Flintshire-based fortress is different to the other castles on this list as it was built by the English, in 1277. With its own moat, tower and drawbridge, many call it a ‘castle within a castle.’ Located on the banks of the River Dee in the historic market town of Flint, this castle is famously known as the place Richard II met his rival, Henry Bolingbroke, in 1399 (See Shakespeare’s Richard II.) You don’t need tickets for this medieval marvel, but you can find out more here.

Also in the capable hands of Cadw is the utterly breathtaking castle of Beaumaris, located on the shore of this little port town boasting spectacular views of Abergwyngregyn, Penmaenmawr and Llandudno. Often dubbed the ‘greatest castle never built’, the history of this castle tells of a dream that never quite came true.

Intended to be the crowning glory following the completion of Harlech, Caernarfon and Conwy castles, it was never quite finished as planned due to insufficient funds and lack of building supplies at the time. Although still impressive for its sheer size and ambition, this unfinished fortress is beautiful for its imperfections and its encompassing medieval military craftsmanship and aspiration. Open from 10am-4pm up until November and you can book your tickets and tours here. 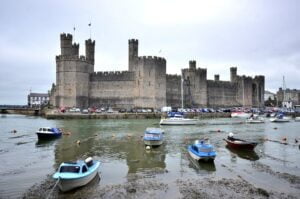 Built to withstand invasion and assault is the poignant palace of Caernarfon on the banks of the River Seiont. Built over 47 years, echoing imperial Roman design and that of the Mabinogion’s Breuddwyd Macsen Wleddig, this 700-year-old masonry is recognised as one of the world’s greatest buildings of the Middle Ages.

The pride and joy of this North Welsh wonder is the Eagle Tower with is great turrets and 6 metre thick walls. See the place where the prince ‘that was borne in Wales and could speak never a word of English’  lived, and find out more about the world heritage site here.

Another of Edward I’s masterpieces, this 600-year-old castle represents a tale of heroism in the face of undeniable difficulty during the Wars of the Roses. You might know this story by the popular Welsh song, often considered the Welsh’s second anthem, ‘Men of Harlech.’ Find out more about this overwhelming defeat here.

The castle then, at the turn of the 15th century, fell to Owain Glyndwr, the independent leader of Wales – but there’s plenty more in the history books surrounding Harlech Castle, right up until the end of the English Civil War in 1647.

Walkers and ramblers of Llyn Padarn’s lonely route will see this solitary guardian of Snowdonia. This sturdy tower, standing at 15.2m high, was inspired by the same designs as Llywelyn ein Llyw Olaf’s fortresses. This rustic relic doesn’t need pre-booking or tickets, meaning anyone can wander up to this ancient wonder and marvel at the National Park’s views. 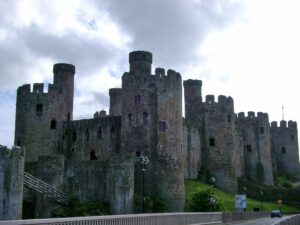 Perhaps the oldest castle on the list is the stunning medieval fortress overlooking the Menai Straits and the town of Conwy. Behind the outlines of this 700-year-old beauty are the craggy hills of Snowdonia, overlooking the winding streets of the popular tourist town. The castle itself was built by King Edward I and his architect, Master James of St George, in an astounding four years between 1283 and 1287.

Now looked after by the Cadw trust, this ancient site has been very well preserved. Thanks to a recent restoration, history buffs can meander the castle walls and do a complete circuit around the castle’s battlements. You can visit this wonder between October and March (2022) for only £9.90 per adult and children under 5 go free! Find out more here.

“As Welsh and rugged as the mountains of Snowdonia itself.” This Gwynedd-based castle was erected around in the 1200s to command the mountain passes and stands as a tribute to Prince Llywelyn ap Iorweth. Facing many defeats, conquests and changes of hands, Dolwyddelan castle became a romantic ruin in the 19th century – and you can find out more about the castle and the panoramic landscape it surrounds here.

On the banks of the River Clwyd stands King Edward I’s anomaly: a castle not on the coast, but on a river instead. Lying several miles inland in the market town of Ruthin, in Denbighshire, this castle was built in the 13th century to subdue the Welsh. Boasting an impressive diamond-shaped stronghold with twin-towered gatehouses, it had its own moat back in the day. Find out more here. 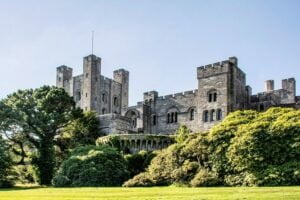 Fit for a princess, and perhaps the most preserved and habitable of the castles in Wales at present, this stunning neo-Norman stone façade dominates the landscape of the hills surrounding Snowdonia and Bangor. Built in the 19th century by Thomas Hopper, this former medieval fortified manor house boasts a donjon, extensive grounds and gardens, an art collection, and stunning panoramic views.

It provides the perfect day out for families and couples wanting to soak up the history and culture of North Wales and its historic patrons. You can find out more about tours, days out, or even events by clicking here.